Anyone familiar with tarot instantly recognizes the logo of U.S. Games Systems as the Rider-Waite Fool card. After Stuart Kaplan launched U.S. Games Systems in 1968, he adopted the now-iconic Fool not only because his birthday is on April Fool’s Day, but also because the Fool embodied his own sense of adventure, his ability to take a leap of faith in his bold undertaking of bringing tarot to America.

In an interview with Stuart Kaplan, Stephen Winnick noted:

"The Fool stands for new beginnings, for blank slates, for innocence. It’s also the card of taking a chance, seizing an opportunity. As the first of the sequence of the Major Arcana (at least according to the most popular theory), it stands for the first step of a great journey. All of these apply to Kaplan, who as a young man took two steps that would help revitalize Tarot, first in the U.S. and then around the world: first, he began importing Tarot cards to the United States. Then, he began publishing them through his own company." (Read the whole interview here) 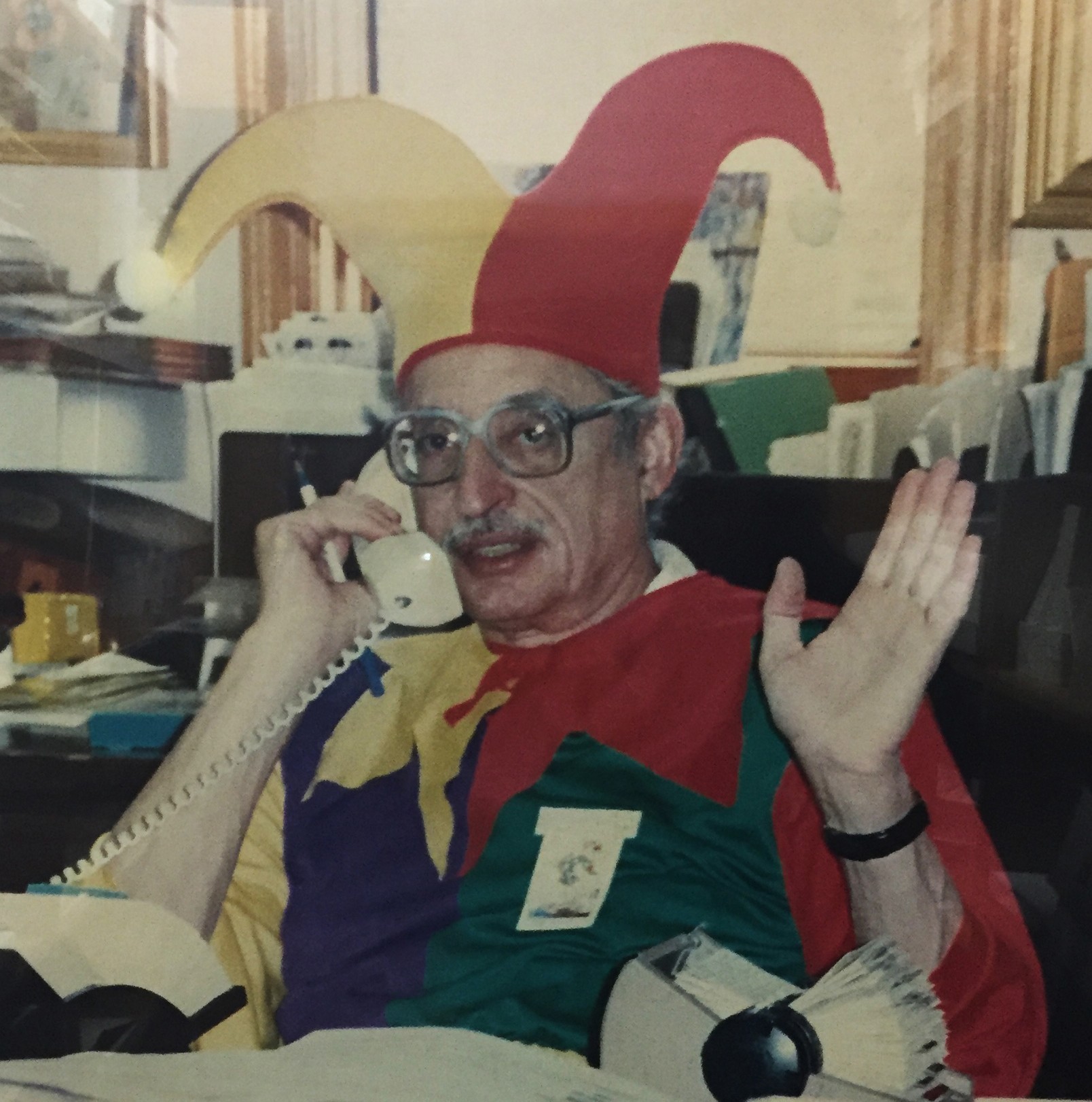 Historically the Fool, also known as the Jester, was an advisor to the king. He was someone whose role it was to shake things up by offering a different point of view. He had a unique amount of freedom to confront the royal court with his irreverent humor. 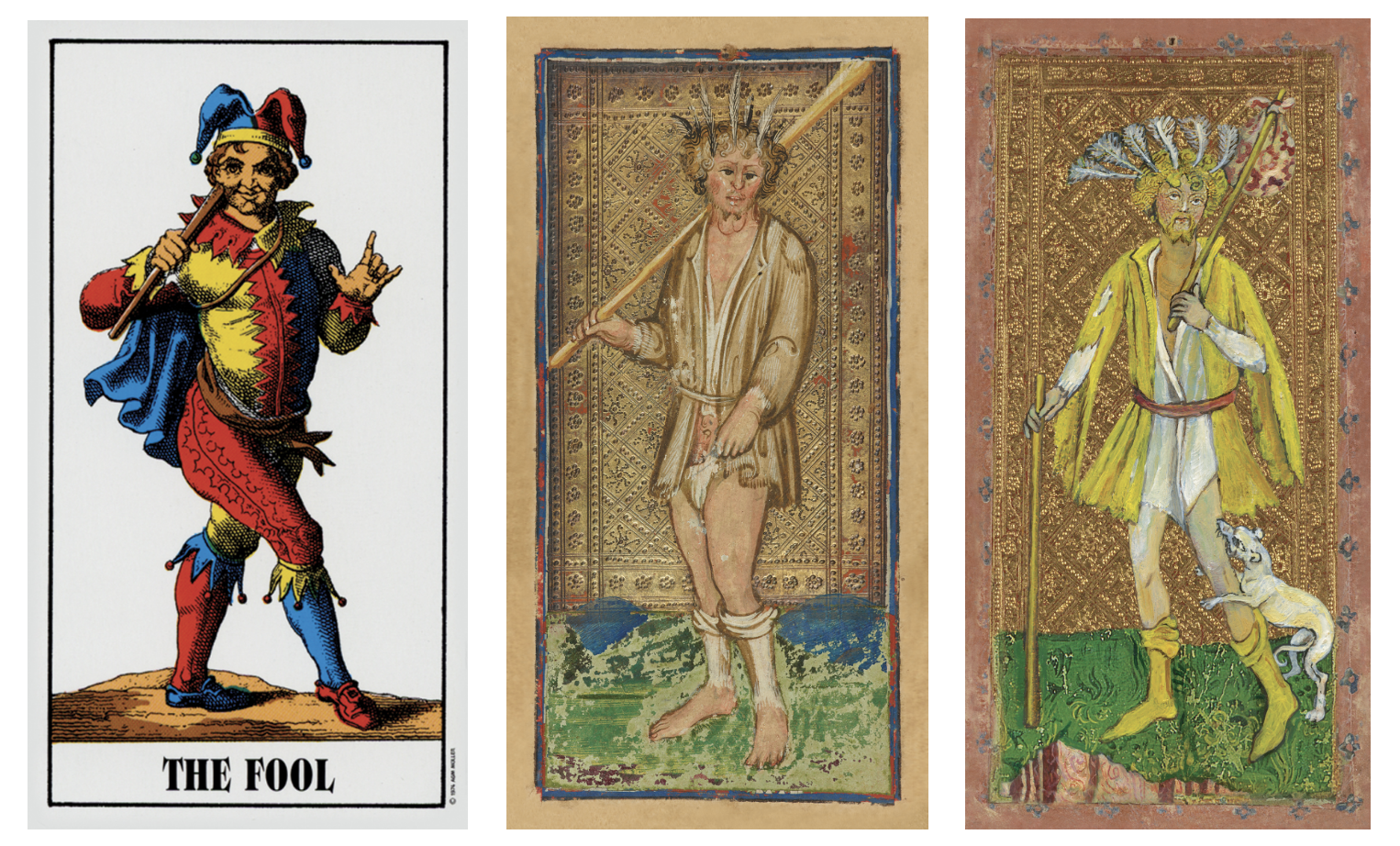 In the Swiss 1JJ Tarot (the first tarot deck U.S. Games Systems sold) and most Marseilles tarot decks, The Fool is humorously portrayed as the Jester with his colorful garb. 15th century tarocchi decks like Visconti Sforza and Cary-Yale show a more serious version of the fool, as a poor beggar. The archetype of the Fool as a person who travels light, with few material possessions, seems to be the common thread that weaves itself through tarot. It is this free spirited, innocent Fool with his canine companion that Pamela Colman Smith brilliantly portrayed in the Rider-Waite deck she illustrated in 1909. Her depiction of the Fool would become the standard point of reference for thousands of tarot decks that would follow in the decades to come. 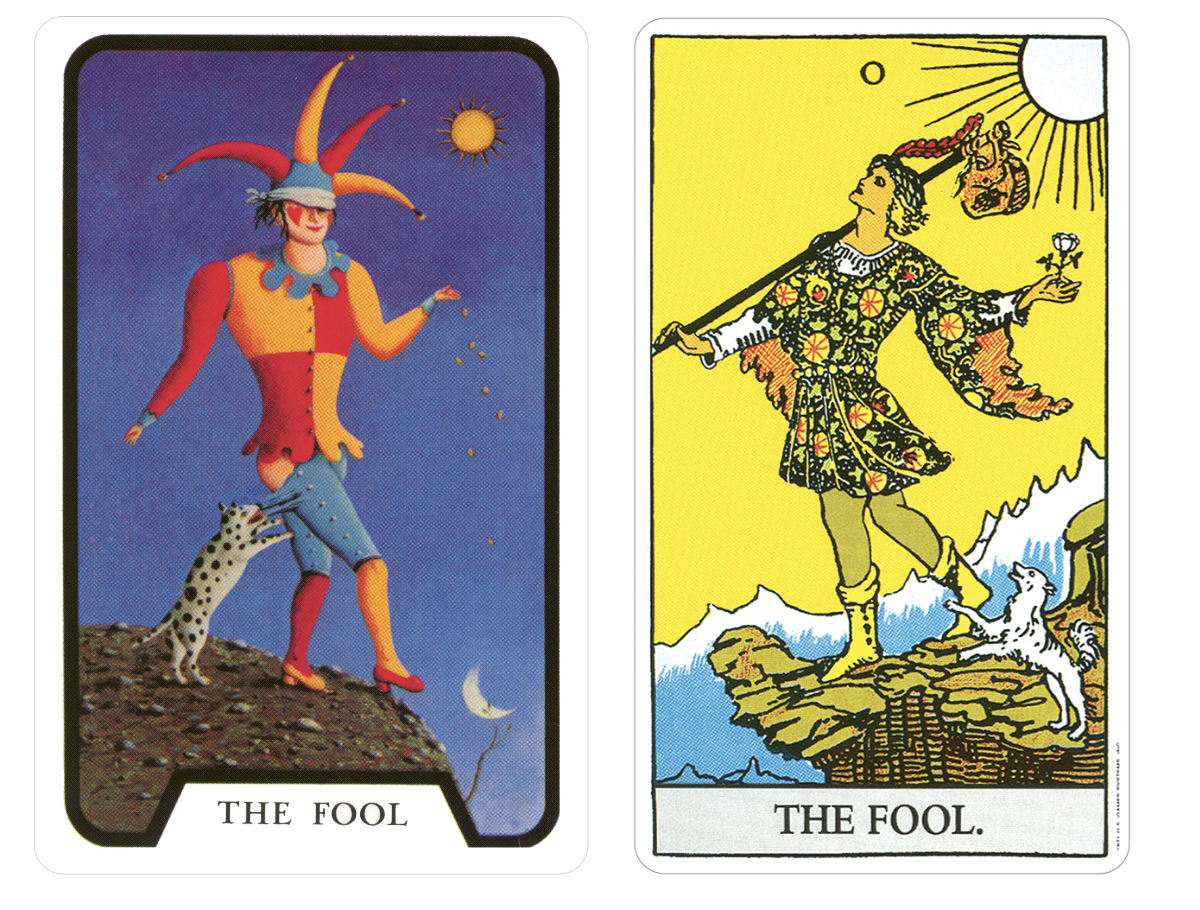 Symbolism in the Fool Card

Other key symbolic elements in the Rider-Waite-Smith Fool card include the position of the Fool figure at the edge of the cliff. He is launching into the unknown completely unconcerned about risks and outcomes.

Scarlet Ravenswood discusses the symbolism in the RWS Fool card extensively in her article “Uncovering the Secrets of the Fool”.

The Dog: “While earlier decks show the dog as an active member in the beggar's or jester’s humiliation, you definitely don’t get that feeling when you look at the Rider Waite dog. Images of dogs in general make us think of loyalty. You can go as far back as The Odyssey, where Odysseus had a loyal dog named Argos who was the only one who recognized him when he returned home from his travels. Perhaps in this instance, it shows the dog’s ability to understand the essence of who we are even after we’ve evolved and changed. You get the sense that this dog, too, will still be loyal to the Fool after he undergoes his transformative journey. “

“Dogs are also seen as symbols of companionship, which suggests that the Fool also needs a companion on his journey. If you feel intuitively pulled to the image of the dog in this card, you likewise might suggest during the reading that it would be a good idea to have a partner or friend help you out as your begin this new journey.”

The Knapsack: “The knapsack in the top right of the corner reminds us of the things we ourselves carry in our daily lives. On the one hand it can allude to materialism. While the fool appears to be nicely dressed, he oddly carries very little in this bag. Perhaps a suggestion that on a spiritual journey one needs little in terms of material items. The specific image on the bag is not clear, though some say it is the head of an eagle. Again the idea is that by removing our own physical attachments to the world, we can take flight on our own more profound journey.”

The Rose: The rose the Fool holds is white, the color of purity, and assures us that the journey while difficult, will also be beautiful. In addition, the white color encourages us to clear our own minds as well in order to forge a greater intuitive connection to this card.”

She adds these insights: “In a more broader sense the fool can represent the beginning of our own spiritual journey. Some refer to the whole of tarot in general as “The Fool's Journey” as if the fool is like the protagonist in a great story and the other cards of the major arcana represent people he will meet and learn from as he goes along his journey. Perhaps we too are the fool here—we are the protagonists in the story of our own spiritual development.”

Many contemporary tarot decks portray the Fool in a similar fashion. Artists have gotten very creative with portraying the fearless figure ready to face all the challenges at the beginning of his journey. 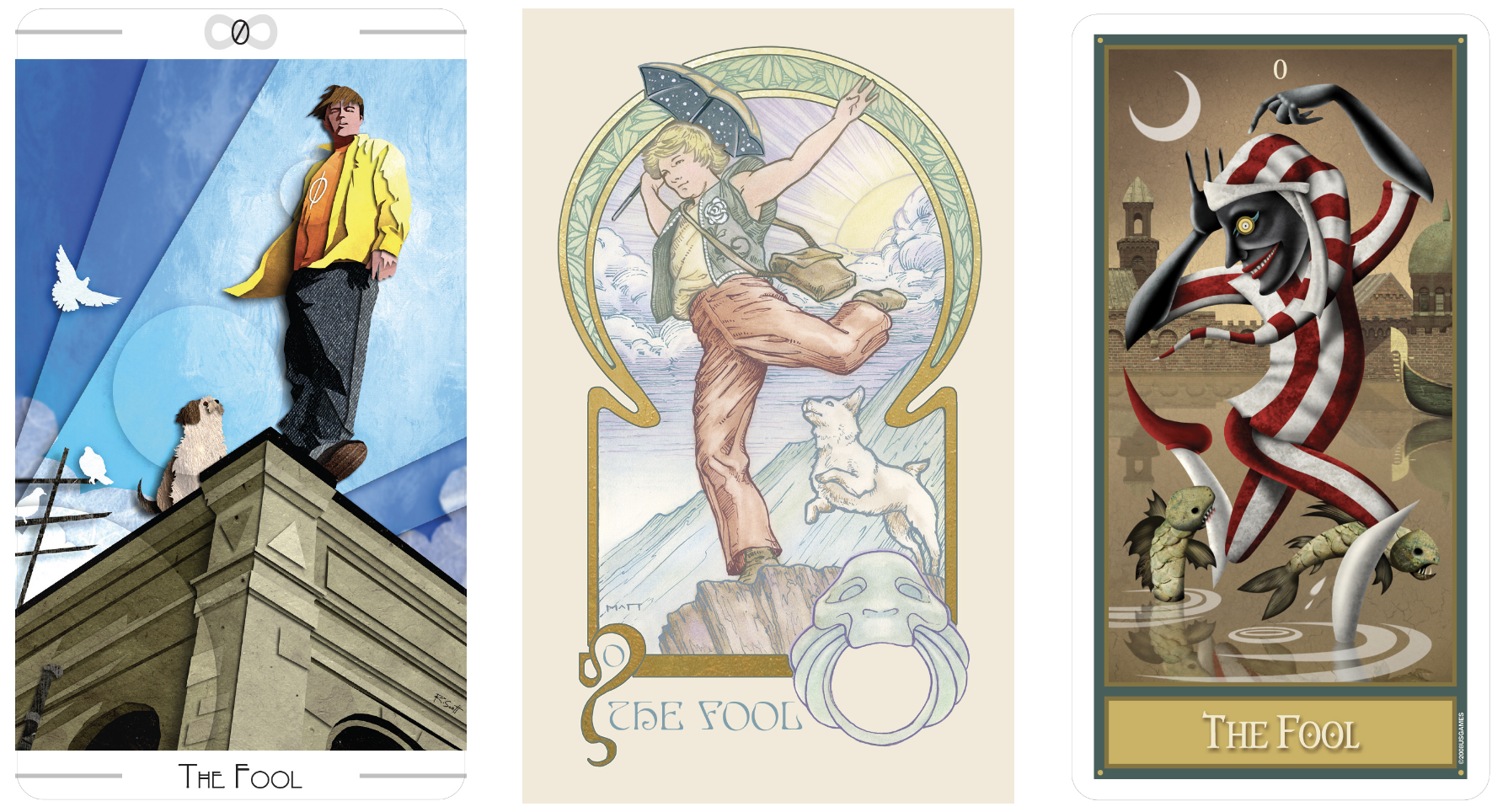