At its most basic definition, tarot is a pack of seventy-eight cards. Though a tarot deck can be thought of as both a game and a divinatory system, this article focuses on tarot as a method of divination. There are a myriad of ways to divine but here we are restricting our view to tarot alone.

The idea of tarot as a deck can be traced to Venice in the 15th century. If you search further back, you will be able to take a journey that leads you along the Silk Road back to China. It was there that paper was invented as well as cards that were used to play games. Though it is difficult to authenticate the actual “birth” of tarot, the Major Arcana or Trumps seem to have been a product of the 15th century.

Looking at the seventy-eight tarot cards, the first thing to note is that there are two major categories of cards within a deck; the Major Arcana and the Minor Arcana. The word Arcana is derived from the word ‘arcane,’ which means hidden secrets. The Major Arcana, or Trump cards, is comprised of twenty-two cards typically numbered zero through twenty-one. Many see the Major Arcana as being archetypes or energies greater than ourselves. The first card, the Fool (Number 0) is said to move through the other twenty-one cards in an archetypal journey known as the Fool’s Journey. Each card explores a step in the self-actualization process. The World card (Number 21) marks the completion of the journey. The symbolism within the Major Arcana is often seen as allegories of universal human experiences along the path of life.

The second group of 56 cards comprises the Minor Arcana, which explores the details of day-to-day activities and minor events in life. This group of tarot cards seems to have developed from the Italian tarocchi deck, which was used for playing card games. Like playing card decks, the Minor Arcana is divided into four suits, which are usually called Cups, Wands, Coins (or Pentacles), and Swords. Within the world of tarot these suits have a variety of names. It is easiest to understand that these four suits represent the four elements that make up everything in the cosmos. The most widely recognized associations are Swords as Air, Wands as Fire, Cups as Water and Coins as Earth. You will find some variation based on individual authors’ and artists’ point of view.

In tarot, Water is considered to be a feminine element and the suit of Cups relates to our emotions, feelings, relationships, moods, spirituality and intuition.

Fire is generally thought of representing masculine energy, and the Wands relate to creative passion, inspiration, drive and action.

The Coins (or Pentacles) connect to Mother Earth and represent all things in the financial and material world including money, possessions, goods and services, nature and physical experiences.

Each of the four suits of the Minor Arcana has 14 cards; numbered cards, or pips, Ace through 10, and four Court Cards.
The pip cards follow numerological patterns of meanings:

The 16 Court Cards often represent people at different stages of development. They can also be seen as personality types, based on their rank and elemental associations. They may be assigned different names in various tarot decks, but in typical Rider-Waite structure the Court Cards generally follow this pattern.

This is an introductory overview of how the tarot deck is constructed in a traditional style deck and how each card functions. There are a number of different ways the meanings of the cards can interpreted in a reading. Some of these are explored in the article Tarot Tips.

Starting to read tarot can be an exciting, yet daunting process for the beginner. There are as many methods for interpreting the cards as there are decks, so it’s a matter of finding the system that works best for you. The three most common methods are: the symbol approach, the book approach and the intuitive approach. No one way is better than the other, except insofar as one system may work better for you as a reader.  You might also find that one approach works well for you with certain tarot decks, while with other style cards, you feel more comfortable with a different approach. Here are three different methods for reading the cards. 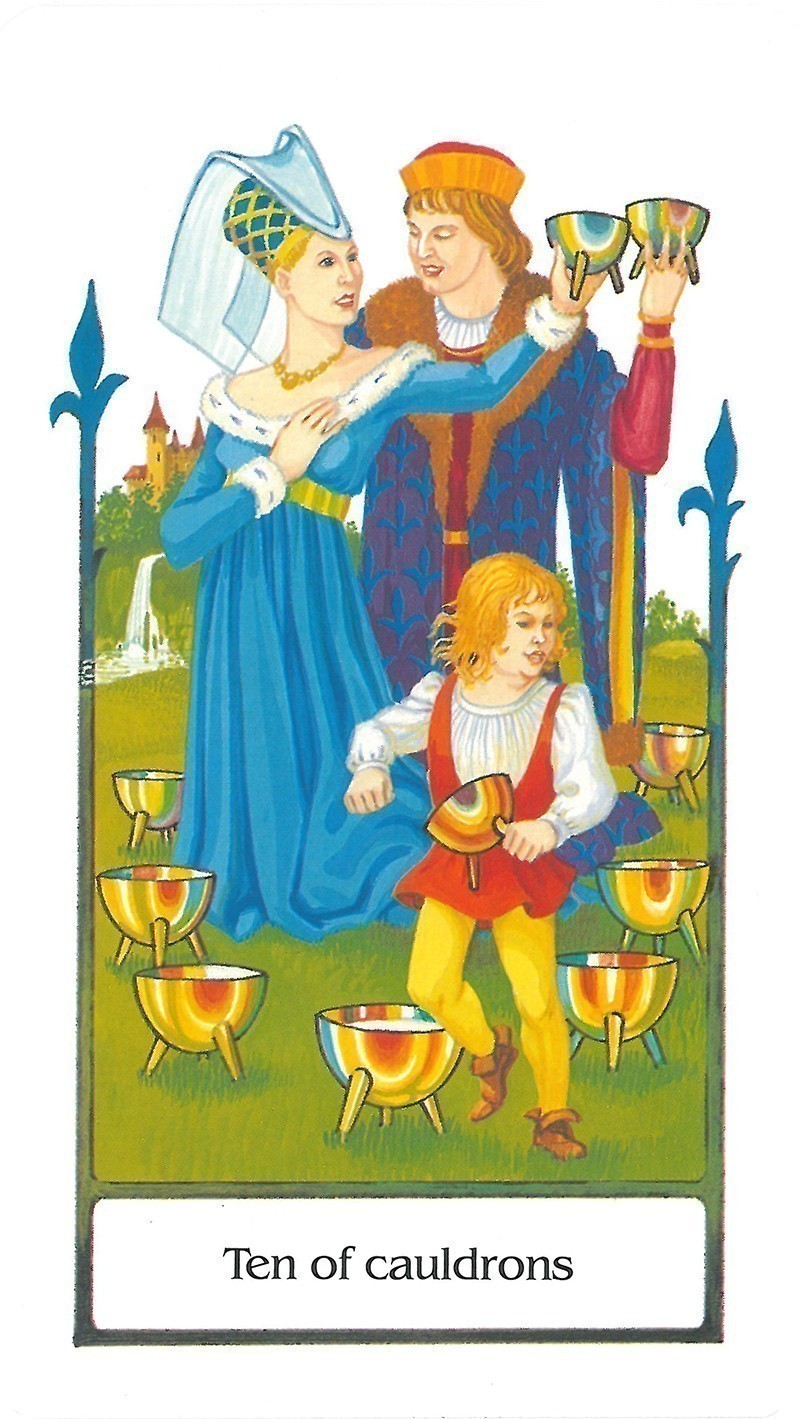 The symbol approach allows you to use your own set of definitions for the images you observe in a card. For instance, in this Ten of Cups from Tarot of the Old Path, a couple with children and a dog is presented. For most of us, we see the nuclear family right down to a companion animal. We think of the stability of family or the happiness of children and pets. To some, these symbols might have a different meaning of overwhelming responsibility and being tied down. When you use the symbols style of reading tarot, you want to work out what the images mean to you personally. In this approach, you might not use the guidebook that comes with the deck. Just remember that when you are reading for others, you are using your own personal slant, which might not always work for your querent (1).

The book approach uses keywords and the card meanings described in the guidebook that comes with the deck. In this type of learning approach, memorization becomes important. Your readings might consist of  laying out the cards in a spread (2) then referring to the booklet to discover the meaning. This method is particularly helpful if you are using a new, unfamiliar tarot deck. As you continue your work with the deck, the need to reference the book for card meanings would ul 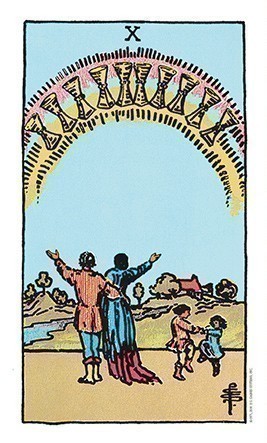 timately be replaced by an innate understanding that develops from memorizing each card. For instance, you would know that a basic interpretation of the Ten of Cups from the Rider Waite Smith deck  would be “General contentment, domestic happiness, abundance.” Keywords are the staple of this type of approach, which is the most common method used in the tarot community. Many tarot students use it as a foundation for their learning. An important factor to remember is that each deck creator may have a different perspective on the cards, so their keywords could vary. Tarot teachers often recommend using the Rider-Waite-Smith deck as the basis for comparing other decks. You can expand your knowledge this way.

The third approach is that of the intuitive reader.  The first two styles described above are usually the foundation for this system. Symbols, images, associations and keywords become tools for the intuitive reader. One thing that sets this style apart from the others is that many intuitive-based readers tend to mix in non-standard information and non-traditional meanings in their readings. There is no one prescribed way to be an intuitive reader, as interpretations are personal and subjective. A reader might start with a set of standard meanings like the book approach, but they allow the images to speak to them as in the symbol-style reading. Adding life experiences plus the information that a client might offer, the intuitive approach manifests as more of a patchwork, weaving in aspects of the symbol and book approaches. 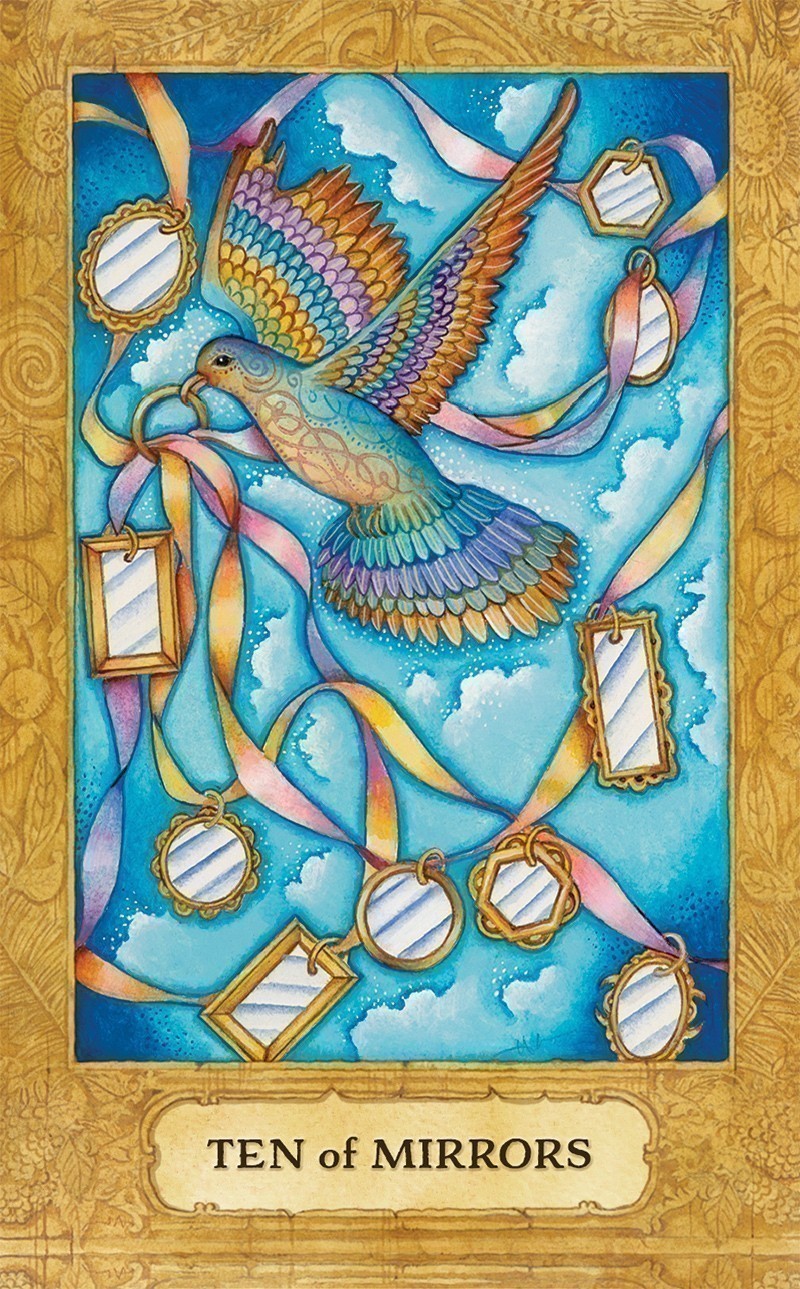 When working with a new deck, you might begin by learning the keywords provided. As you become more confident and experienced, you will find that you begin to trust your intuition, which develops and deepens with practice. Being less reliant on conventional meanings allows you to approach any new tarot deck and form an intuition-based relationship with the cards, even when they do not follow traditional Rider-Waite structure. With decks like the Chrysalis Tarot , the intuitive approach frees you as a reader to dive right into the unique imagery on the card. 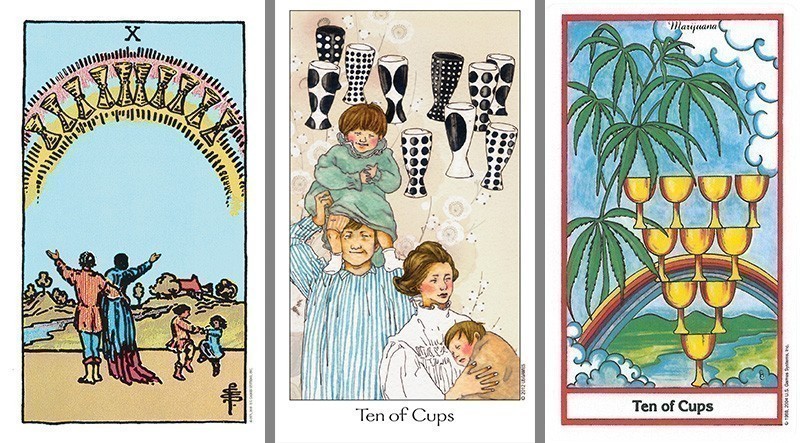 Your approach to the Tarot might begin with one type of learning but end with another. It is best to test things to see what works for you personally. A good deck to begin with is the Rider-Waite-Smith Tarot. We find it useful to get two different decks so  that you can learn through comparative techniques.  It’s helpful to look at the Rider-Waite Ten of Cups  next to the same card from a more contemporary deck like Dreaming Way Tarot or a themed deck like Herbal Tarot.  This practice helps you factor in the iconic symbols of the RWS with the artistic interpretation of other decks.

For tarot readers and collectors there is a vast assortment of decks to choose from with a tremendous variety of different styles, structures and themes available, from the historic to the contemporary.

The earliest tarot decks date back to 15th century Milan, Italy. These Tarocchi decks were used for card games as well as divination. The pip cards (numbered cards Ace through Ten) generally had simple images designating the suit and the number, rather than the full pictorial scenes we see in modern tarot decks. The classic artwork of these Tarocchi decks is beautifully reproduced in the over-sized cards of the Cary-Yale Visconti deck and the Visconti-Sforza Pierpont Morgan deck.

Painted in 1909 by Pamela Colman Smith under the direction of A.E. Waite, Rider-Waite was the first modern tarot deck to have full pictorial scenes throughout both the Major and Minor Arcana. The majority of tarot decks created since follow the structure and symbolism established by the Rider-Waite deck.

Innumerable modern decks are patterned after the Rider-Waite, with different art styles offering varied perspectives on the iconic imagery.

At the other end of the spectrum are decks that explore the shadow side of the psyche. Dark and edgy digital artwork appears in the Deviant Moon Tarot and Archeon Tarot. Tarot of Dreams and Jungian Tarot delve into dream symbolism and psychological archetypes.

Beyond the Rider-Waite style tarot are decks steeped in esoteric, Egyptian and/or kabbalistic meanings such as Brotherhood of Light Egyptian Tarot, Hermetic Tarot, and the Crowley Thoth decks. Sun and Moon Tarot offers a contemporary take on the esoteric Thoth system.

Finally, there are a handful of tarot decks that offer unique systems of divination and insight. The 81-card deck Dreams of Gaia Tarot focuses on exploring personal change and growth. The award-winning Chrysalis Tarot follows familiar structures but introduces archetypes and messengers to guide you through your spiritual journey.