Celestial Tarot is both a handbook of the heavens and an oracular guide to the inner life. The twenty-two cards of the Major Arcana are represented by the twelve zodiacal constellations and ten planets. Each minor suit represents one of the four astrological elements. The accompanying booklet introduces the greater mysteries with a chart of astrological and elemental correspondences. The descriptions of the cards explore the mythological archetypes represented in the major and minor arcana, brought to life by the exquisite artwork of Kay Steventon.

"Embedded in the night sky are archetypal images, symbols, and stories that have enchanted the human soul for aeons. Onto this sanctuary of the sky the sky the ancients projected their imagination using the star-patterns to animate their myths and create the skyscape that shapes the imagery of Celestial Tarot. Underpinning the seventy-eight cards of Celestial Tarot are the ancient traditions of astrology, astronomy, and mythology. Celestial Tarot makes a great impact as it not only amplifies and broadens the meaning of the contemporary cards but it also utilizes the oldest forms of divination." 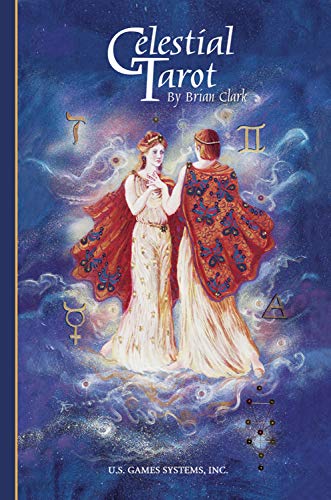 A more comprehensive guidebook of Celestial Tarot is now available as e-book on Amazon and iTunes!

What Customers Are Saying About Celestial Tarot Deck

Artist/astrologer Kay Steventon and author/lecturer Brian Clark together have created a stunning blend of the myths and symbols of astronomy with the tool of astrological divination. The mysteries that are the Tarot emerge in a very different manner, one that is unique and empowering. It is a guide to the heavens, as well as a guide to our inner selves.

While this deck follows the traditional structure of the Tarot (the Major Arcana retain their traditional titles, with Strength as VIII and Judgment as XI; the suits are Wands, Cups, Swords, and Pentacles; the Court Cards are King, Queen, Prince, and Princess), it is overtly based on the traditions of astronomy, astrology, and mythology.

The twenty-two cards of the Major Arcana are represented by the twelve zodiacal constellations and the ten planets of contemporary astrology. In the Minor Arcana, we encounter what the author terms "extra-zodiacal" constellations. The Minor Arcana us divided into decants, with the thought of adding insight and symbolism to each card. In the Court Cards, the Princesses each embody a season, while the Prince, Queen and King each embody the fixed, mutable, and cardinal signs of each element. The artwork is stunning, and strongly carries the character of fantasy. Toss in astrological and elemental symbology, along with Hebrew letters, and this deck rocks! I loved going through the cards and looking for the symbols and the intricate details. The overall tone is a little dark, as far as coloring goes, with deep blue/lavender backgrounds, with imagery in gold, white, lighter lavender, blues and greens, with some bronze/red. It is very hard for me to pick favorite cards with this deck, as I like so many of them! The Fool certainly stands out: associated with the planet Uranus, the Fool is seen as acting suddenly and unexpectedly. He is shown as a small, naked figure against the night sky, arms up and in an apparent freefall. The lower half of the card appears to be a choppy sea, with the shoulders, head, and upraised arm of a male figure shown in the upper half, against a light lavender background. Celestial Tarot is a deck for those who want to work with astrological associations, or those who are interested in myth. This deck certainly could be used for readings, but it would also work well for meditation and journeying.

This is a complicated, though breathtaking, deck design. It will probably suit the more astrologically minded among us, and those with a good working understanding of Greek mythology. Each Major Arcana card is given either a planetary or zodiacal attribution. Each suit is assigned to its traditional Element, and each pip also has a mythological figure or a constellation associated with it. The images are generally dictated by sections of the myth in question -- for example, the 9 of Swords is associated with Canis Minor, and the image shows us a dog glancing back over his shoulder. Superimposed upon him is the shape of the constellation named for him, and the astrological symbol of Gemini to indicate separation.

The artist who created this deck is Kay Steventon, who brought us the fantastic Spiral Tarot, working in collaboration with Brian Clark. They have gone on to produce an oracular deck called Ancient Feminine Wisdom. The images in this deck are evocative and almost ethereal. The complexity of symbol incorporated into each card is astonishing, with occult glyphs from the Hebrew alphabet, the Qabalah and other sources all adding insight into the mind of the artist.

The little booklet that accompanies the deck explains extensively about each of the legends, which were incorporated into the design of the cards. Though some of the given interpretations are somewhat unusual I found them complementary to my existing knowledge -- expanding my view of specific cards. For example, the 4 of Pentacles is described thus "With the 4 of Pentacles, Taurus initiates the individual into the awareness of the boundary separating Earth’s sacred and secular spheres by recognizing the distinction between inner values and outer possessions. When this card appears the individual needs to reflect on his or her relationship with the material realm". Whilst not exactly a classic interpretation, it is one which builds a new dimension of understanding.

This is most definitely not a beginner's deck. But for a more experienced user of Tarot I would suggest that, both as a meditation tool and a working deck, it could definitely have a lot to offer. The accompanying booklet is very well written and extensive. If you liked the Spiral Tarot, you'll love this one, especially if you have an interest in astrology and Greek myth.