Shortly after 2019 Pride Month, honoring the Stonewall Uprising, our Chairman Stuart Kaplan called the creative team at U.S. Games Systems in for a meeting. Urban Tarot had been out a few months and we were all very excited about the positive reception it was getting. Pride events and Robin’s personal experiences with LGBTQ+ causes inspired us to become more proactively involved in supporting the LGBTQ+ community.

Our brainstorming session led to two exciting goals for the company. First, as a publisher we decided we wanted to give LGBTQ+ tarot artists and allies a voice and a creative forum. We all concurred that a collaborative Pride Tarot deck would be the ideal way for U.S. Games Systems to support the Pride movement. We knew this deck should  be positive, welcoming and a celebration of the diversity in the LGBTQ+ community. 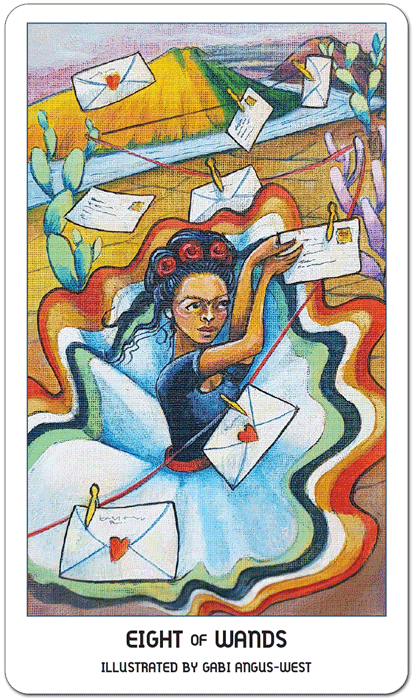 Secondly, we committed to making a sizable financial contribution to an organization working to improve the lives of LGBTQ+ individuals. Since it is all too often young people who most acutely experience isolation and marginalization, we chose to donate to a group whose mission is to help struggling young people. The most suitable organization was The Trevor Project, the world's largest suicide prevention and crisis intervention organization for LGBTQ young people. To learn more, visit www.TheTrevorProject.org. In 2020, US Games donated $10,150 ($150 of this amount came from one of the Pride Tarot artists, Gabi West). In 2021, US Games contributed an additional $10,000.

To create Pride Tarot, we reached out to U.S. Games Systems artists, some of who identify as LGBTQ+, while most of the others have close family and friends who are members of the community. We also invited other LGBTQ+ tarot artists to contribute artwork (some new, some from existing tarot decks) for the Pride Tarot deck. The response from all the tarot artists contacted was unanimous and overwhelmingly enthusiastic. Our contributors were particularly pleased to work with U.S. Games Systems, knowing that we have supported The Trevor Project.

The result is a tarot deck reflecting amazing unity as well as diversity. We have 45 different artists’ work collected from all areas of the LGBTQ+ community and from around the globe, including Russia, Italy, France, Germany, Spain, the UK, Australia, Malaysia, the Philippines, Japan, Columbia, Guatemala, Canada, the United States, Scotland and Mexico. Many of these artists are activists for LGBTQ+ rights. All of them have poignant and powerful stories to tell. We are grateful  to every one of these artists for sharing their vision and their inspiration.