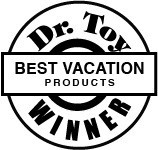 More fun than Hearts and Rummy, award-winning Wizard is "the Ultimate Game of Trump" the whole family can enjoy. The rules are easy to learn -- the strategy adds an exciting challenge. In Wizard, players try to win the exact number of tricks they bid.

The Wizard Card Game is similar to a regular deck of playing cards with the addition of four Wizards and four Jesters. Jesters always lose and Wizards always win. In the first round, players start out with one card. In the second round, players are deal two cards, and so on, with each round becoming more challenging. When you make your exact bid, you earn points. If you take too many or too few tricks, you lose points. The special, custom Wizard Score Sheet helps players keep track of bids and points. Wizard Card Game can be played with 3-6 players. Instructions are in English, French, and Spanish.

What Customers Are Saying About Original Wizard® Card Game

The Development of Wizard Card Game

Ken Fisher of Toronto, Canada first conceived the card game "Wizard" at his lakefront cottage in Haliburton, Ontario. He wanted a card game that he could play with his wife and young son as well as other vacationers during the quiet evening hours. Building on the basic game play of the traditional card game "Oh Hell," Ken modified some of the rules and added 8 additional cards, 4 Jesters and 4 Wizards, which radically improved the game. The rules are very simple, but the strategy involved in playing Wizard makes it both enjoyable and challenging.

Wizard Card Game was self-published in 1986 with a first production run of 10,000 games. In 1991, fueled by an enthusiastic public response to Wizard, a complete graphical redesign was undertaken which brought the card-fronts essentially to their present design. In 1994, Ken Fisher granted world rights to U.S. Games Systems, Inc. of Stamford, Connecticut. The overall quality of the cards was vastly improved and the current card back was instituted. A deluxe version was later created, which included bidding wheels. Bidding coins were also added to the product line, which indicate to other players the number of tricks won and remaining to be taken.

Since its introduction in 1986, Wizard Card Game has been translated into 15 languages and is sold in China, Czech Republic, Finland, Greece, Indonesia, Malaysia, Kazakhstan, Lithuania, Japan, Slovenia, Sweden, Switzerland, and Russia to name a few countries. In 1996 a license was granted to Amigo-Spiele for manufacture and distribution in Germany of a Fantasy Wizard version.

In 2003, www.wizardcards.com website debuted providing free online play of "Wizard" for players around the world. The annual Wizard World Tournament is held in a different country each year. In 2011, the Wizard Card Game app was launched for the iPhone and iPad.

The editorial staff at Toys Bulletin has recently reviewed several games published by US Games Systems, Inc. However, we should take some time to mention what many consider to be their "flagship" game, that being "Wizard." Most game players have played or heard of "Wizard." Those that have not should place their order right after reading this review.

"Wizard" was invented by Ken Fisher in 1984, and the first game cards were released in 1986. The staff at Toys Bulletin has been playing the game for over 10 years, and although it may resemble other card games, it stands on its own merits.
The object of "Wizard" is to bid correctly on the number of tricks you think you will take during each hand of play, and earn points along the way. The player earning the most points wins the game.
The playing deck consists of a regular 52 card deck of playing cards, plus 4 wizard cards and 4 jester cards for a total of 60 cards. The game is suggested for ages 10 years and up, although a junior version is available (see later in review). It is recommended for 3-6 players. For the first hand, all players receive just one card, on the second hand, they receive two cards and so on until the final hand when all cards are dealt. Immediately after dealing each player is asked how many tricks he or she will take during that hand. It is entered on the scoresheet.
The first of the remaining cards is turned over and becomes the trump for that hand. The last hand is considered "no trump." Play begins to the left of the dealer, and any first card can be played, but the player should always keep in mind their predicted number of tricks. Players must follow suit, and if someone cannot follow suit, then they can play any other suit, or even use a trump card. Wizard cards trump all other cards and Jester cards count as zero and lose to all other cards. Wizard and Jester cards can be played on any trick.
When the hand is completed, the number of tricks won by each player is tallied. If a player correctly bid the right number of tricks, they score 20 points plus 10 points for each trick taken. If a player's bid was incorrect, that player loses 10 points. Play then continues through the final hand and the winner is the player with most accumulated points by the end of the game.
Despite our familiarity with "Wizard," we decided to test it on our age appropriate focus group. Well, the response was not surprising. Everyone really loved it, both men and women and young and old. This is the kind of game that every family must have in their collection of games.
There are also lots of variations to the game, including hidden bids, quick play, blind bids, and even one called Jester bid, where the bid is always 0.  We also want to mention the "Wizard Junior" Card Game, with colors rather than suits and fewer cards intended for players 8 years old and up.
There is even a special fantasy edition of "Wizard" patterned after the popular German version of the game. Although the rules are the same, the fantasy version incudes elves, dwarves, humans and giants instead of suits. The cards are beautiful.
Please check out "Wizard" at funagain.com. All of the "Wizard" games mentioned here can be bought for less than $10.00 each. For even more fun, go to the special "Wizard" website, wizardcards.com. Without saying, "Wizard" receives Toys Bulletin's highest gold rating.

You might be under the impression that in order to be fun a game has to be complex. It’s true that we tend towards games with a bunch of different components, sneaky player interaction and a little rule that you only get to use once in a while, but when you remember to do it people will stare at you in awe of your skill; or maybe stare at you with pure hatred for remembering that rule. It’s true that we review games from that part of town most often. That doesn’t mean we don’t enjoy games that are very, very simple – when they are also very very clever.

Ken Fisher’s Wizard is one of those games. You almost couldn’t ask for it to be any simpler. Wizard is a trick-taking game: there are four suits of cards with values from 1 to 13. After dealing, one of the remaining cards is revealed to determine the trump suit. The first player plays any card from his hand, the other players then have to follow suit or, if they cannot, either play a trump to win or throw in a card from another color to get rid of it. The trick goes to the player that had the highest trump or, if no trump was played, the highest card in the original suit. The first round is played with only one card per player, each subsequent round with one more until finally all 60 cards are dealt out on the last round, coincidentally not leaving a card to determine the trump suit.

There are two sets of special cards that add some spice: Wizards and Jesters. Both Wizards and Jesters belong to no suit but can be played at nay time, even when you could follow suit. The first Wizard in a trick always wins that trick, no matter what other cards are in it. A Jester never wins any tricks, except in the rare case that the trick contains only Jesters – in that case, the first one wins again. If a Jester is revealed for trump suit, this round has no trumps; in case of a Wizard the dealer chooses a trump suit after seeing his cards.

There is that final piece of rules that puts Wizard in the “very, very clever” category and made it popular enough all over the world to have its own world championship. Before the first card in a turn is played, every player must make a bet how many tricks he is going to take this round. The only way to score points is through fulfilling this bet: 20 for succeeding at all plus 10 for every trick you took. Any trick more or less than your bet not only gets you nothing at all for this round, you even lose 10 points for every trick by which you miss your bet. The most-played (and in my opinion most interesting) variant of Wizard demands that the bets of all players never add up to the real amount of tricks available, making sure that there will not be a peaceful solution.

And suddenly those very simple rules come together to make a much deeper and more enjoyable game than you would expect from “simple trick-taking”. In the first two or three rounds, there still is much luck involved: with only two cards, you’re not exactly drowning in strategic options and whether you win your bet or not depends heavily on card luck. But the first few rounds are only for warming up: from round five on, you have many more options to consider and many more ways to contribute to your own success. In this phase of the game, against experienced opponents, you have to pull all the registers: sometimes you want to rid yourself of a suit that you started with only one or two cards in so you don’t have to follow suit. Sometimes you need to find a way to lose high cards because you find that your bet was too low. You will want to base your bet on these and a couple of other things, like the number of Wizards and Jesters in your hand, but also your distance from the start player. And sometimes you just have to recognize a truly bad hand and bet low in order not to lose points. On the other side of things, a good hand has a strong push-your-luck element where you want to try for more tricks than you’re strictly comfortable with because more tricks still means more points. And there you have it: a game with very simple rules that is nevertheless engaging and quite difficult to master.